Competitive Programming is commonly used as a way to check the competence of candidates, especially when the number of applicants are large. The results of the program is checked against previously verified results to generate a score for each user to create the leader board. However, in many cases, logistical challenges make it difficult to ensure that the candidates are not cheating by collaborating with each other, especially since most exams are conducted online without any supervision. Since only the value of the outputs are checked, this gives the cheating participants a high score at the detriment of the candidates who haven’t cheated.

In this project, I’ll be trying to identify cases of plagiarism for a particular programming challenge conducted at the firm where I’m working currently.

Note: I’ve obtained permission from the organization I work with to use the dataset, and all the Personally Identifiable Information is anonymized before analysis as well.

The data is not easily available since the free version of the website which was used to conduct the test doesn’t give any APIs to access the data. Hence for first part of tackling the problem I got the data by using scraping techniques from the competition website. For this, I used Python with Selenium to do the following steps. The scraping tool built in Selenium has throttling built-in to prevent DoSing the server. 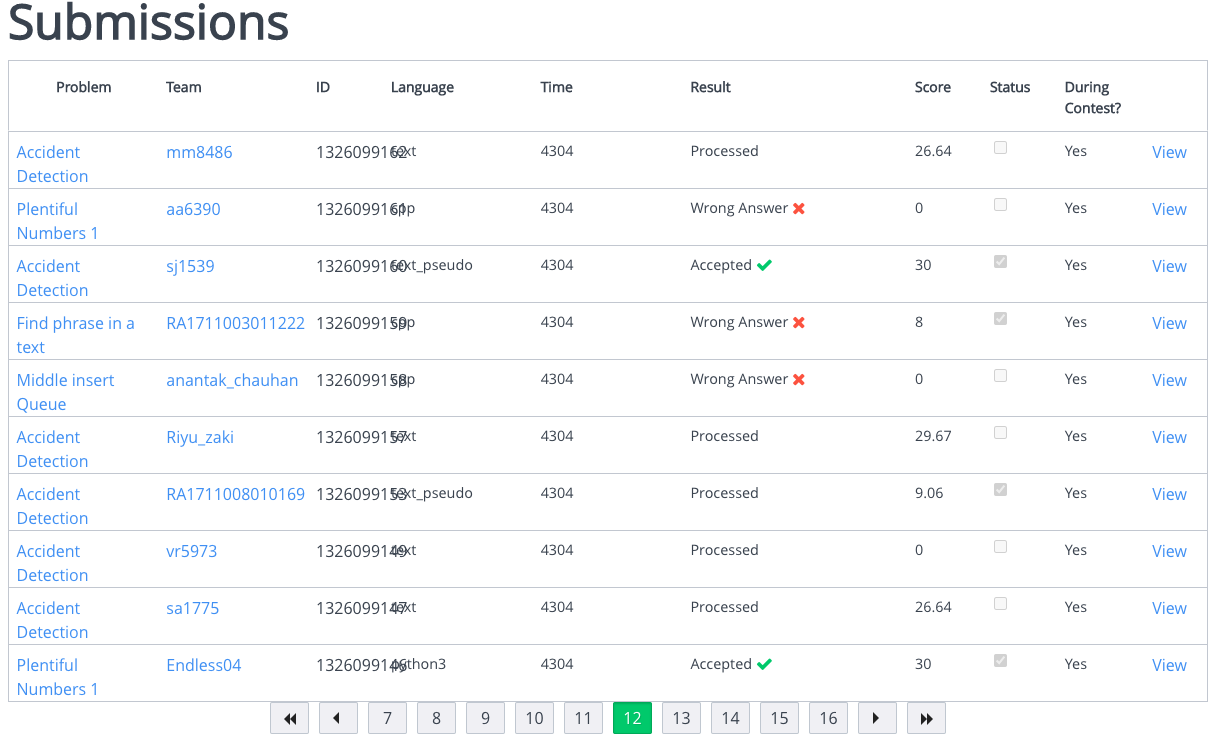 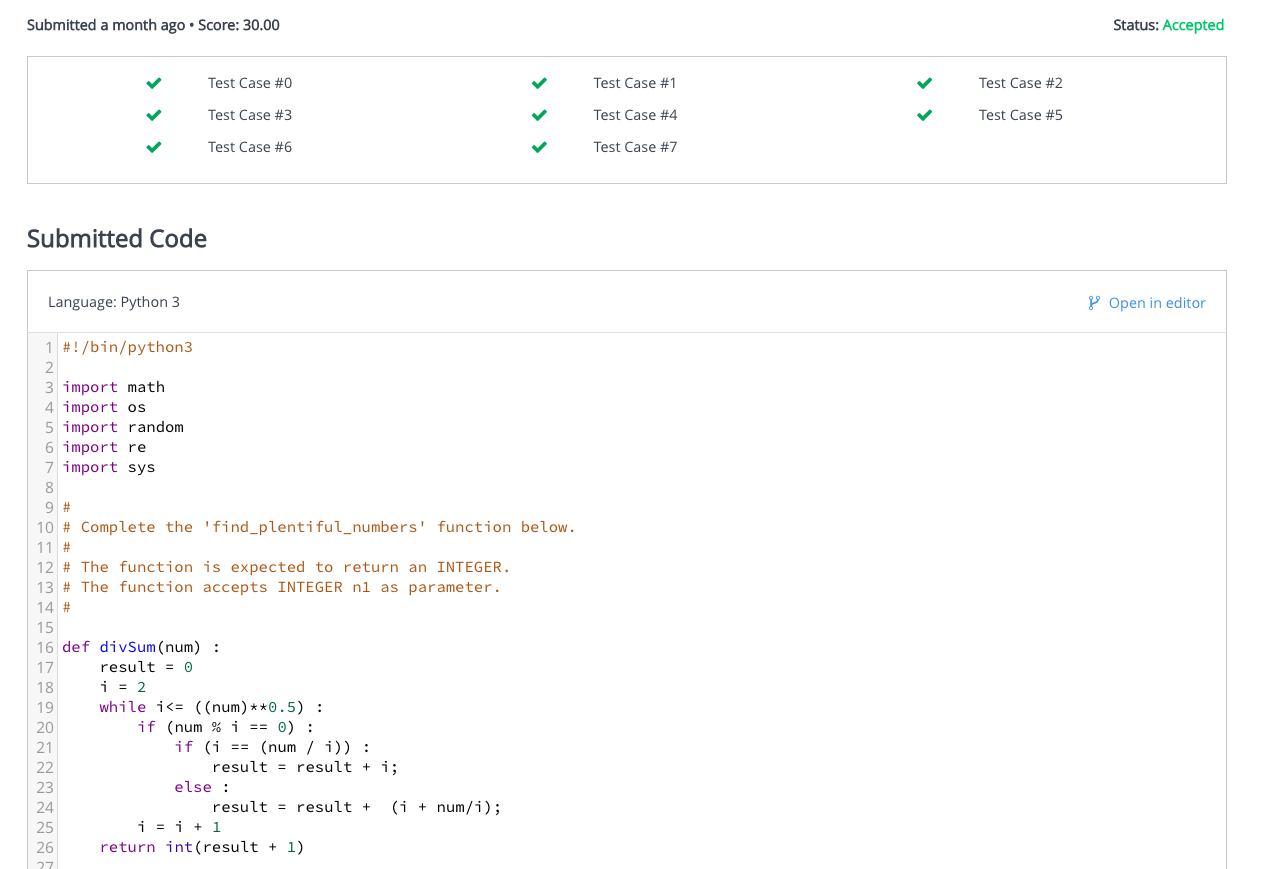 The data from each submission was stored in a local SQLite database for easy retrieval.

Once the data is retrieved, all personally identifiable information like usernames was anonymized at source before the analysis to protect privacy for this exercise. Usernames were anonymized using a hashing function. The users were from one of two institutes, here anonymized as institute_1 and institute_2. In total, each user participated in a maximum of 5 challenges (Crossing Ants, Find phrase in a text, Middle insert Queue, Plentiful Numbers 1, Seesaw Pivot).

At the end of this step, input data looks like this (code column truncated):

Creating a plagiarism metric for each submission

The first thing that we do is to create a metric to identify two submissions that have been plagiarized. For this, we’re going to assume that plagiarized code has similar content in text. The distance of each submission with respect to all the other submissions need to be calculated. For this we can use various String Metrics. The following string metrics were considered:

Hamming distance is the simplest string distance function. It identifies the number of locations where the characters are different between two strings. However, it requires the two strings to have the same length. In this case it is not always true that people who plagiarized the code would not have made any changes, since an additional space, or renaming a variable or even a newline character can cause significant differences.

Levenshtein Distance was another possibility. In small scale tests, it yielded really good results, but the computational complexity of this distance function is of an order of complexity $O(n^2)$. However, we had a length > 10000 characters for many challenge submissions, and this meant that the computation complexity was too much and the program took too long to finish. Hence this was discarded for practical reasons.

Jaccard index is another fast distance metric, but it measures similarity between sets and doesn’t consider ordering of the characters. Naturally, we couldn’t use this as a metric for this.

Jaro Winkler distance was chosen as the best approach since there are implementations of this with a linear computational complexity and it was found to give good results while eyeballing.

Sample output once the scores have been identified:

Identifying plagiarism threshold for each challenge

Also, each challenge is of a different complexity, and the chances that two submissions are accidentally similar to each other are higher in the simpler assignments, rather than the complex ones. Hence we need to create an adaptive threshold depending on the data itself. 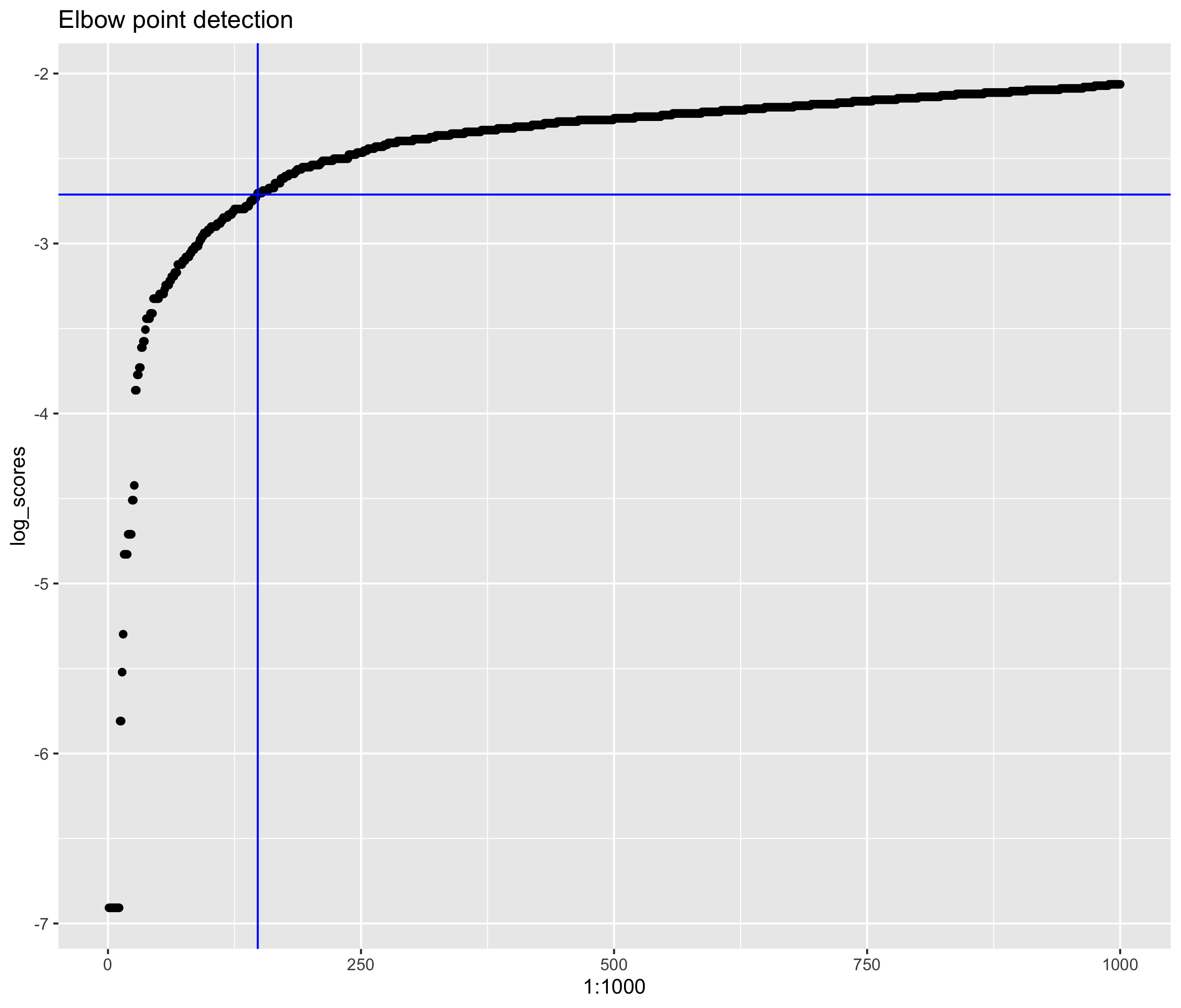 Once the threshold of similarity scores for each individual challenge has been identified, we can now identify the users who have a high probability of having plagiarized. This was implemented as a simple thresholding rule and each user was assigned a score depending on how many of their submissions were closer to the plagiarism threshold. The results are shown below (Fig 4). 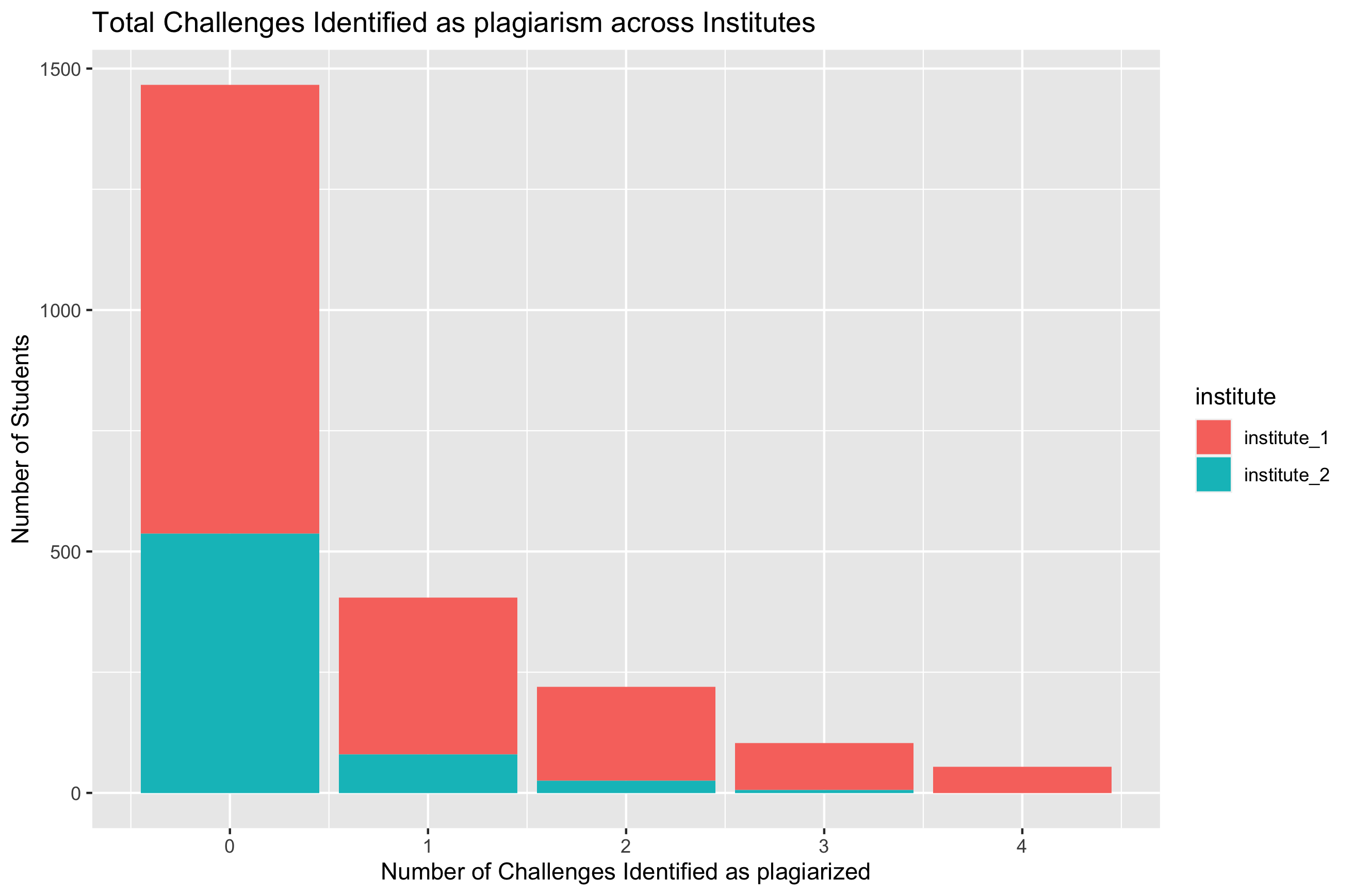 From the above graph, we can quickly summarize that a bulk majority of the students haven’t engaged in plagiarism of any sort. However, a significant chunk of students have been involved in 1,2,3 and 4 submissions which were identified as being plagiarized. In addition, we can see clear differences in the behavior across institutes, which are better visualized using the percentage summary statistics below: 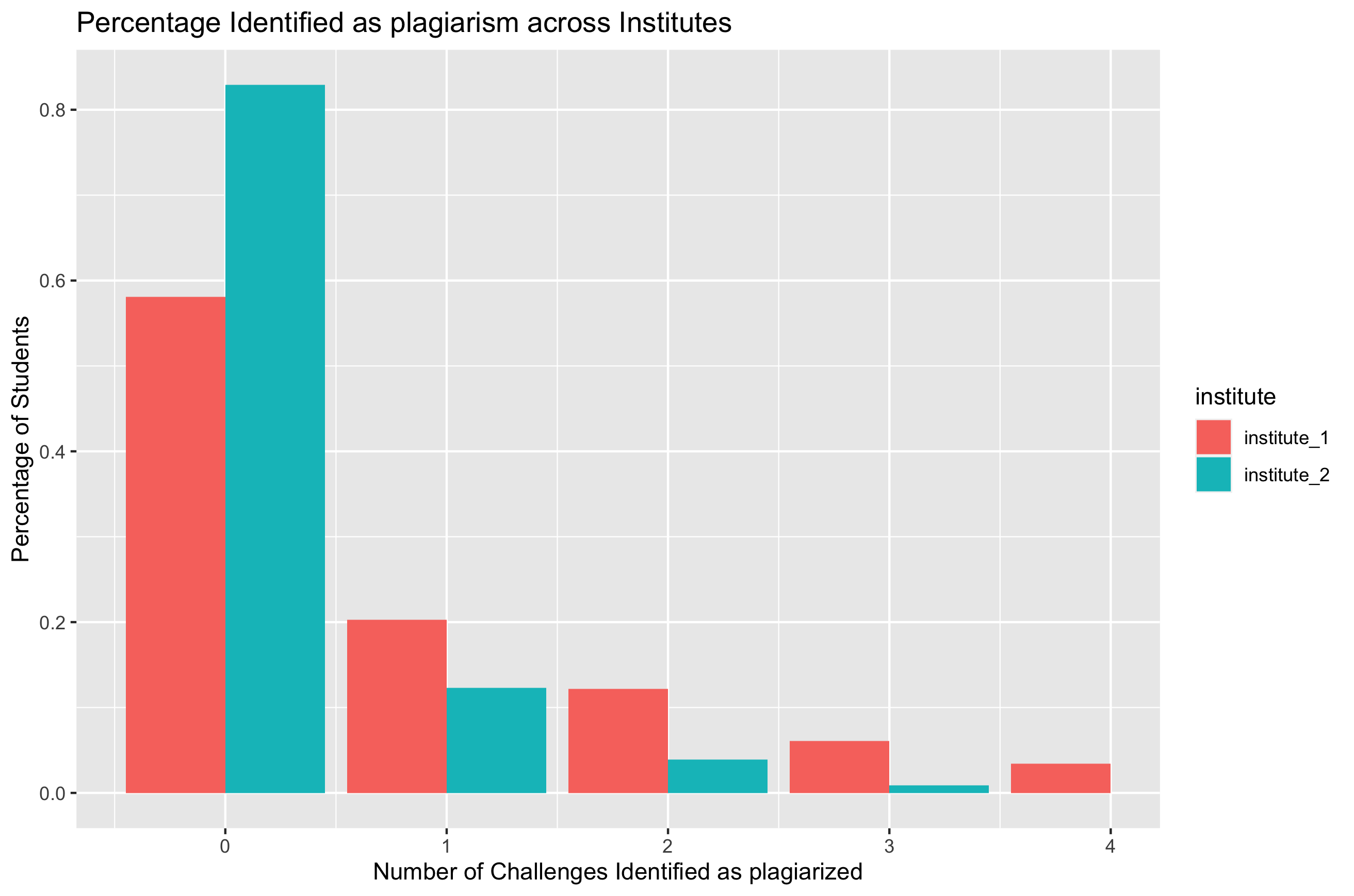 Although institute_1 had a lot more students (from the graph above in Fig 5), it turns out students of institute_2 have been involved in significantly less copying from each other.

In this case, since the true output is not known, it is not easy to evaluate whether the algorithm is exact or not. However, we can gain some confidence on the validity of the analysis by performing some clustering analysis on how the plagiarism chain has spread across users.

In this case we try to use the techniques we learned in the class to form a network of students who copied from each other. In the graph below (Fig 6), each node represents a student and an edge represents two students who have at least one submission that are very similar to each other. The color of the networks represent the institute of the students. 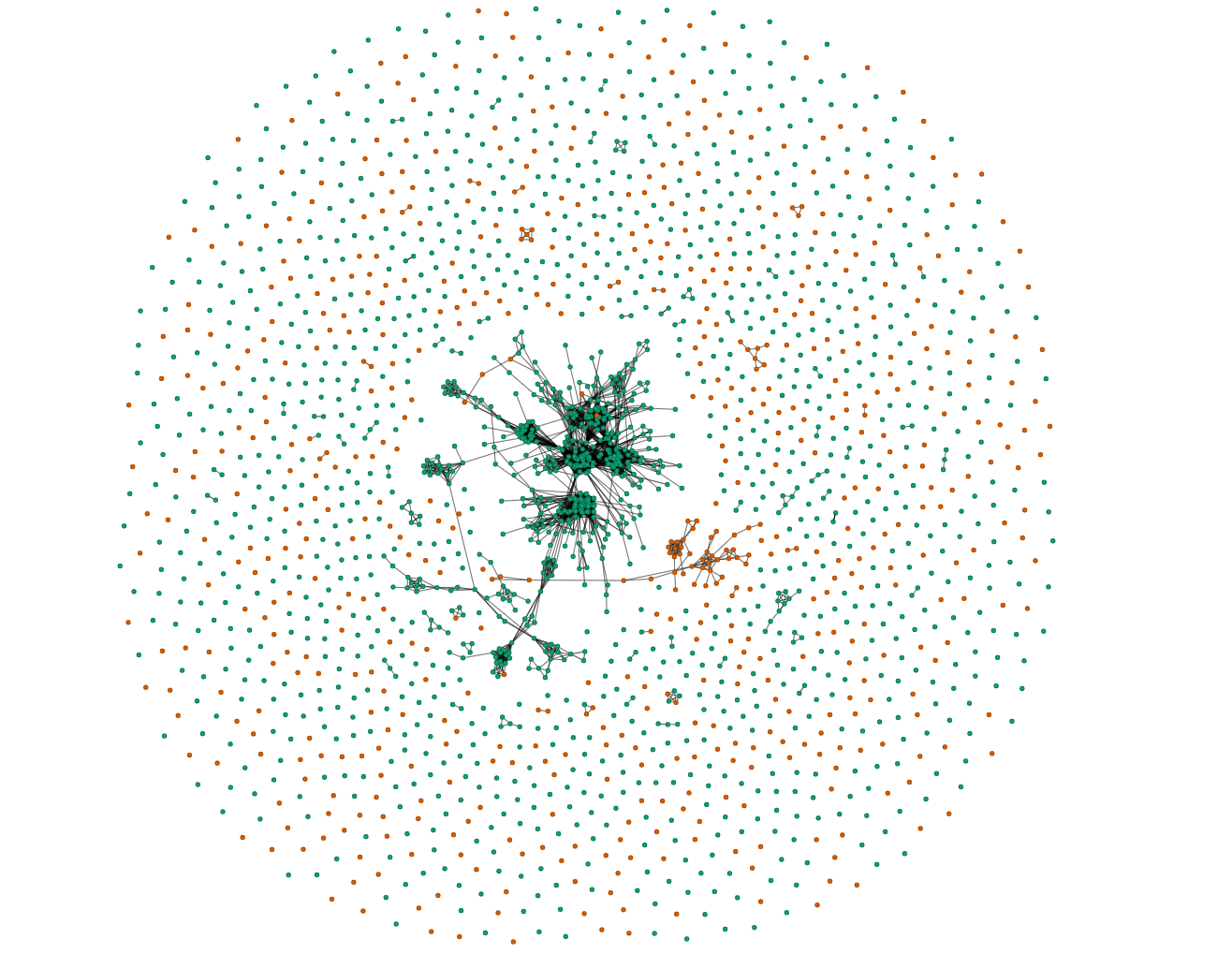 If the plagiarism detection was close to random, we’d have expected the total number of clusters to increase steadily, with some of the points being disconnected, many cliques with 2 nodes, fewer with 3, even fewer with 4, etc. Also, there shouldn’t be any patterns across the two institutes. However, in the graph we can see a different scenario. The brute majority of points are disconnected showing that most people haven’t copied from each other, as expected, but we’re also seeing huge clusters where people nodes are closely connected to each other showing a good amount of organized plagiarism. 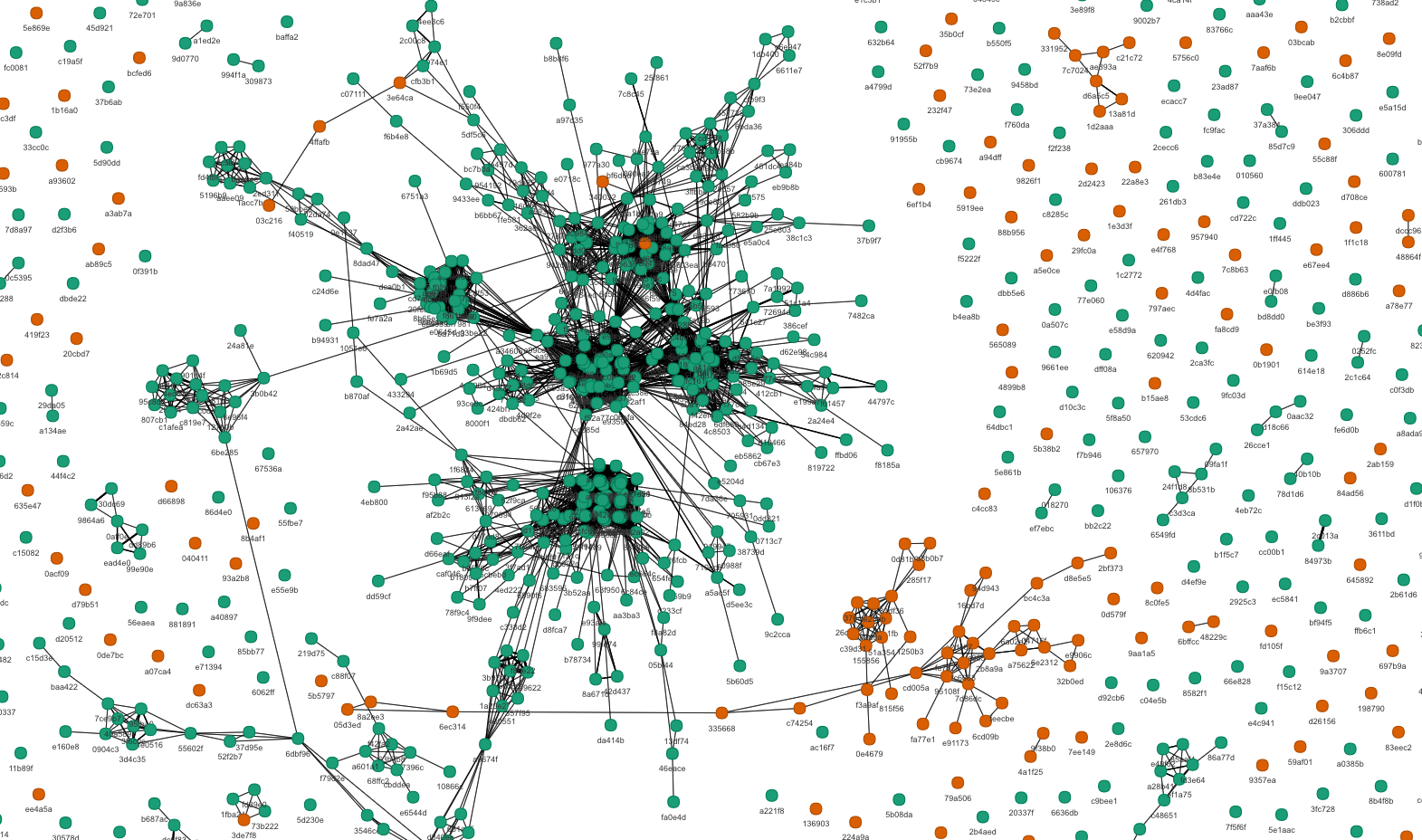 In the graph above (Fig 7), we can clearly see clusters of the same colors which are closely connected to each other. This represents students of the same institute who have copied the answers en masse and distributed. This is much more prevalent in institute_1, but we see a few clusters in institute_2 as well. However, the interconnection between the red and green colors are very rare (it’s more logistically difficult to engage in plagiarism across institutes) which shows that the detection is performing well.

For the real life scenario, it is possible that there are some false positives where two candidates who haven’t plagiarized, and hence this was used as only one of the criteria for candidate selection/rejection. In addition, we give can give another safety factor by which the threshold is scaled to make sure that even if some students who plagiarized were let off, we didn’t unnecessarily penalize students whose code accidentally happened to be similar to other students.