So my (ostensibly high-end) Macbook Pro has been crawling the last few months whenever I connect it to external monitors. Generally it is still usable, however, after a lot of experimentation, I have found that like many things in life I have to make a tradeoff between two out of three things -

If I do all three of the above, within less than 10 minutes, my mac will start overheating and the dreaded kernel_task issue kicks in meaning that my computer is literally unusable.

I had tried a thousand things and failed miserably and so decided to take the plunge this weekend to go for the nuclear option, and do a factory reset of my system to see if that helps. I did basic reading up and figured out the plan (backup important stuff, go to recovery, erase system disk, reinstall, restore backups, install only the things I care about thereby getting rid of any cruft that have accumulated over time) and was ready for the adventure. After doing the backups, I reached recovery mode by restarting and holding CMD + R until the recovery screen appeared.

The two mistakes of my life

The first step was to erase the system disk. Here is where I goofed up the first time. Instead of just erasing the system partition, the recovery prompt helpfully gave me an option to delete the “partition group” which I clicked yes accidentally. I was hoping an act of such great gravity would have at least some sort of a dry run, or a further confirmation, but the system was happy enough to go ahead and delete on that single click. Everything. Although I didn’t realize it at the time, at this point I had ended up deleting not just the system partition, but also the recovery partition that would help me do the reinstall! I had done the proverbial cutting-the-branch-where-you’re-sitting act!

I suspect it would still have been possible to reinstall the system as is at the time (maybe not?) since the recovery was still loaded in memory, but I decided to try and see what would happen if I restarted the system right about now. My argument was - “hey, what’s the worst that could happen, I could always have a power issue causing the system to restart, so might as well try and see it through”. Well, turns out that I’d know soon enough.

Curiosity had killed the recovery.

After the restart, I didn’t do the recovery trick and sure enough MacBook reached the Startup Disk Not Found screen as expected. All was good and expected. However, when on trying to enter the recovery, instead of the familiar recovery screen, I was met with a black screen with a spinning globe icon with NOTHING except an option to connect to Wifi. That’s when I realized the fact that something was drastically wrong. 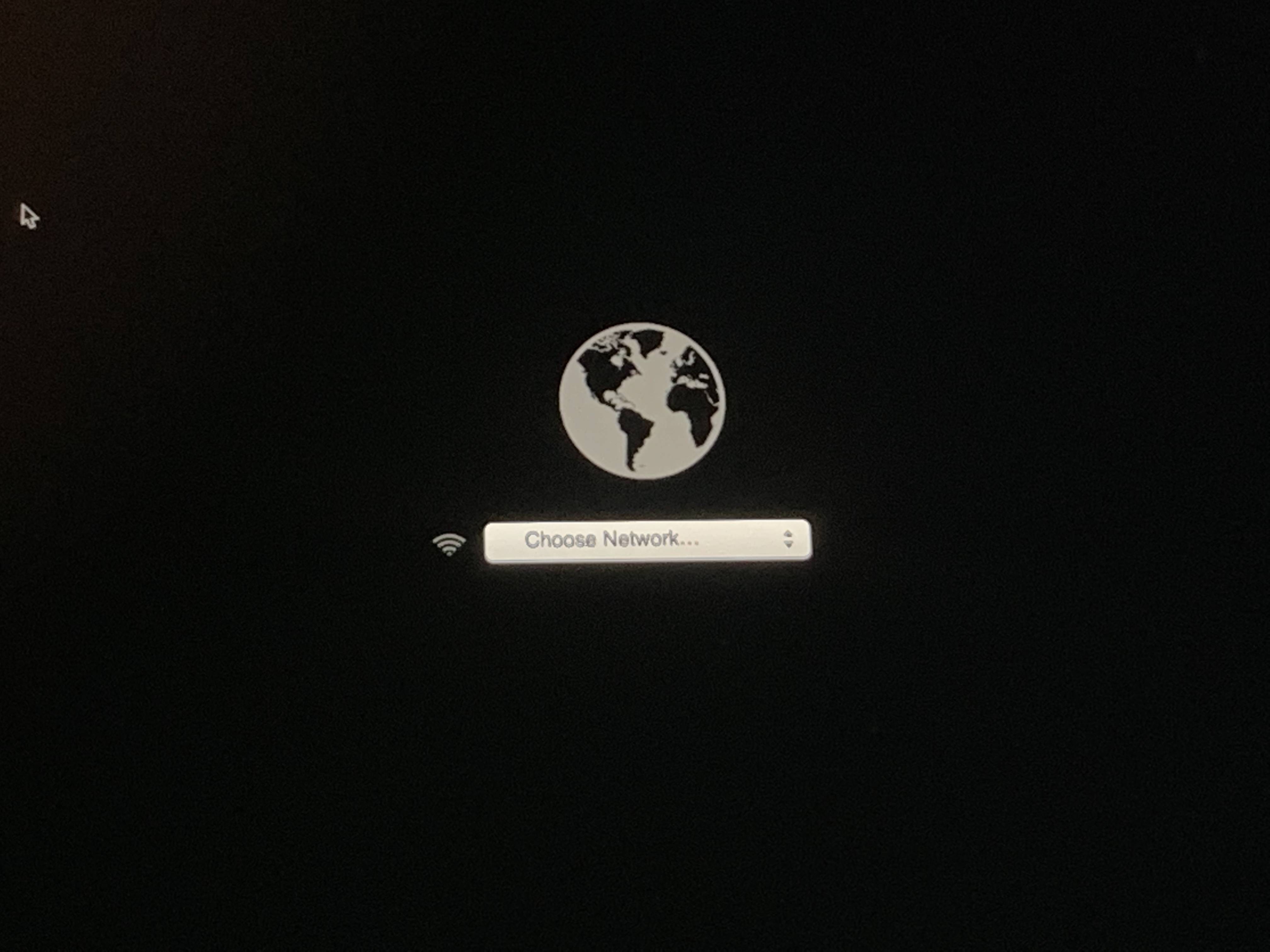 I tried connecting to my Wifi which it seemed to connect to, but absolutely nothing changed - I didn’t get a new message and the globe continued to spin. I waited a little, to no avail. There were no other buttons to click, nothing much do other than watch the globe spin. It didn’t look like it was doing anything n the background either since I still had the option to change my WiFi, and reconnect to a different one just like before.

The next option was to try restarting the system again, in different recovery modes (who knew mac had so many startup key combinations!), while frantically trying to figure out what to do if the recovery doesn’t work. After downloading the system image for Big Sur on my spouse’s Macbook and ordering a new USB drive because I hadn’t used one in eons, I was back to trying to figure out if I could do anything more while I was waiting.

However, it turned out that while the globe was quietly spinning, it was doing something in the background, and in the 15 minutes when I was figuring out alternate options, I had got an error screen on the system.

The error message was succinct, and read apple.com/support - 2002f. Doing the usual debugging by trawling stackoverflow/stackexchange (useful!) and apple forums (which suggests resetting NVRAM and PRAM for any possible Apple issue starting from getting kicked out of Eden) yielded that this issue was because the system couldn’t hit Apple servers. One helpful suggestion floting around was to reset the DNS ip on the router.

As futile as it seemed at that point, I logged into the router settings, and after a lot of digging, changed the DNS from the default to the Google DNS (8.8.8.8 and 8.8.4.4. Restarted the router, restarted recovery, and reconnected to the Wifi.

The change was instant. While the recovery system had kept spinning even after connecting to Wifi many times before, this time it immedately proceeded to “Starting Internet Recovery. This may take a while”. I was on cloud nine (and so was the Macbook trying to do a cloud recovery)!

Already my spouse was asking if she could stop downloading the Big Sur image on her system since she didn’t want any accidental unnecessary upgrades, her being a Site Reliability Engineer. However, I thought that that the danger had not yet passed since it was still just starting the recovery download. And I was right.

After a few minutes, I was hit by a new error. apple.com/support - 1008f. Back to the SOF/SE and the support forums and man pages. Turns out that issue can happen because of the subtle differences between CMD + R and CMD + Option + R. The other possibility was that I had to disable Activation lock by logging into another system and I had everything setup to be ready for that as well. However, it turned out that the changing the startup command to CMD + Option + R actually worked and I was back on the road. With this the the recovery download didn’t stop immediately and I could see from (lack of) speed of the progress bar that it was actually downloading something.

The third error was probably the simplest to solve. A quick google search lead me to this article and all I had to do was to restart the system pressing the magic buttons Option + Command + P + R. The only issue here is that your hands should be reasonably dextrous to do the command while turning on the machine, performing the equivalent of the twister game with fingers.

The final error happened after nearly an hour of the recovery being download. The progress bar stopped at one point and gave up with Error-2004f. Searching online just said that these were internet issues (Lies!) but after the restart, the recovery was smart enough to start from the point where it stopped last minute and continue onwards. The issue happened a couple of more times, and I had to do a few more manual restarts. However, eventually the recovery system was fully downloaded and the automatic restart took me to the familiar, comforting recovery screen. From thereon, installing Big Sur was an absolute breeze and within a couple of hours, I had my new fresh system ready to go.

I have had similar experiences in the past with Win/Linux where the only option at such a stage was to manually flash a new recovery/boot system using an external USB. On retrospect, although the UI/UX could have been better, I am mighty impressed by the fact that I was able to restore my Macbook practically from Silicon and Oxygen all without having to connect any physical media.