NOTE: This is a repost of an article that was first published in 2016, updated to for latest version

Every so often while doing data analysis, I have come across a situation where I have two datasets, which have the same structure but with small differences in the actual data between the two. For example:

In the above cases, I want to easily identify what has changed across the two data.frames, how much has changed, and also hopefully to get a quick summary of the extent of change. There are packages like the compare package on R, which have focused more on the structure of the data frame and lesser on the data itself. I was not able to easily identify and isolate what has changed in the data itself. So I decided to write one for myself. That is what compareDF package is all about.

The output can be visualized either on the RStudio Viewer, or sent to a file as an HTML or an XLSX file.

You can install the CRAN version of the package as below:

The package has a single function, compare_df. It takes in two data frames, and one or more grouping variables and does a comparison between the the two. In addition you can specify columns to ignore, decide how many rows of changes to be displayed in the case of the HTML output, and decide what tolerance you want to provide to detect change.

Let’s take the example of a teacher who wants to compare the marks and grades of students across two years, 2010 and 2011. The data is stored in tabular format.

The data shows the performance of students in two divisions, A and B for two years. Some subjects like Maths, Physics, Chemistry and Art are given scores while others like Discipline and PE are given grades.

It is possible that there are students of the same name in two divisions, for example, there is a Rohit in both the divisions in 2011.

It is also possible that some students have dropped out, or added new across the two years. Eg: - Mugger and Dhakkan dropped out while Vikram and Dikchik where added in the Division B

The package allows a user to quickly identify these changes.

Now let’s compare the performance of the students across the years. The grouping variables are the Student column. We will ignore the Division column and assume that the student names are unique across divisions. In this sub-example, if a student appears in two divisions, he/she has studied in both of them.

For example, Akshay, Division A has had the exact same scores but has two different grades for Discipline across the two years so that row is included.

However, Macho, Division B has had the exact same scores in both the years for all subjects, so his data is not shown in the comparison table.

While the comparison table can be quickly summarized in various forms for futher analysis, it is very difficult to process visually. The html_output provides a way to represent this is a way that is easier for the numan eye to read. NOTE: You need to install the htmlTable package for the HTML comparison to work. 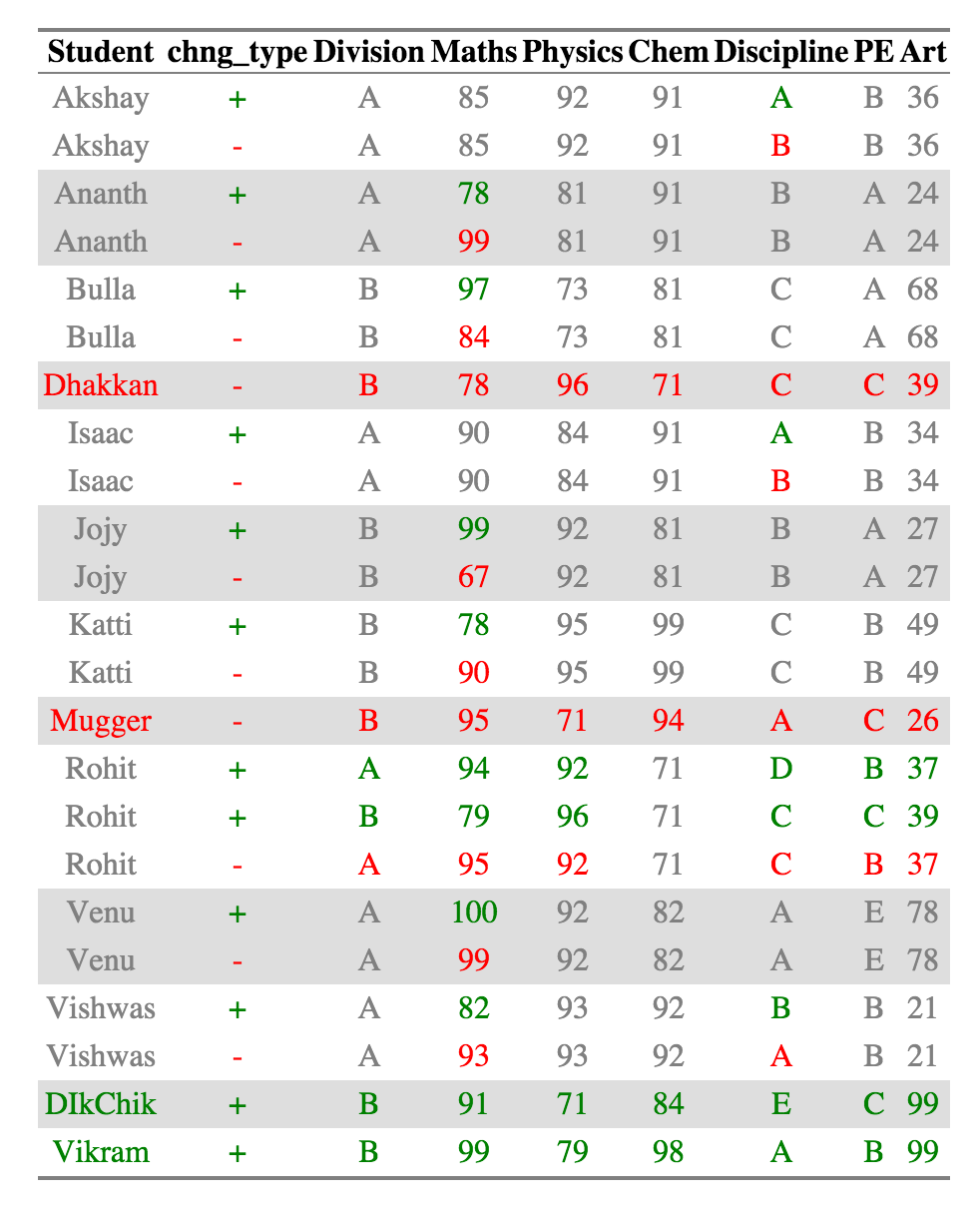 Alternately you can write to an xlsx file as well 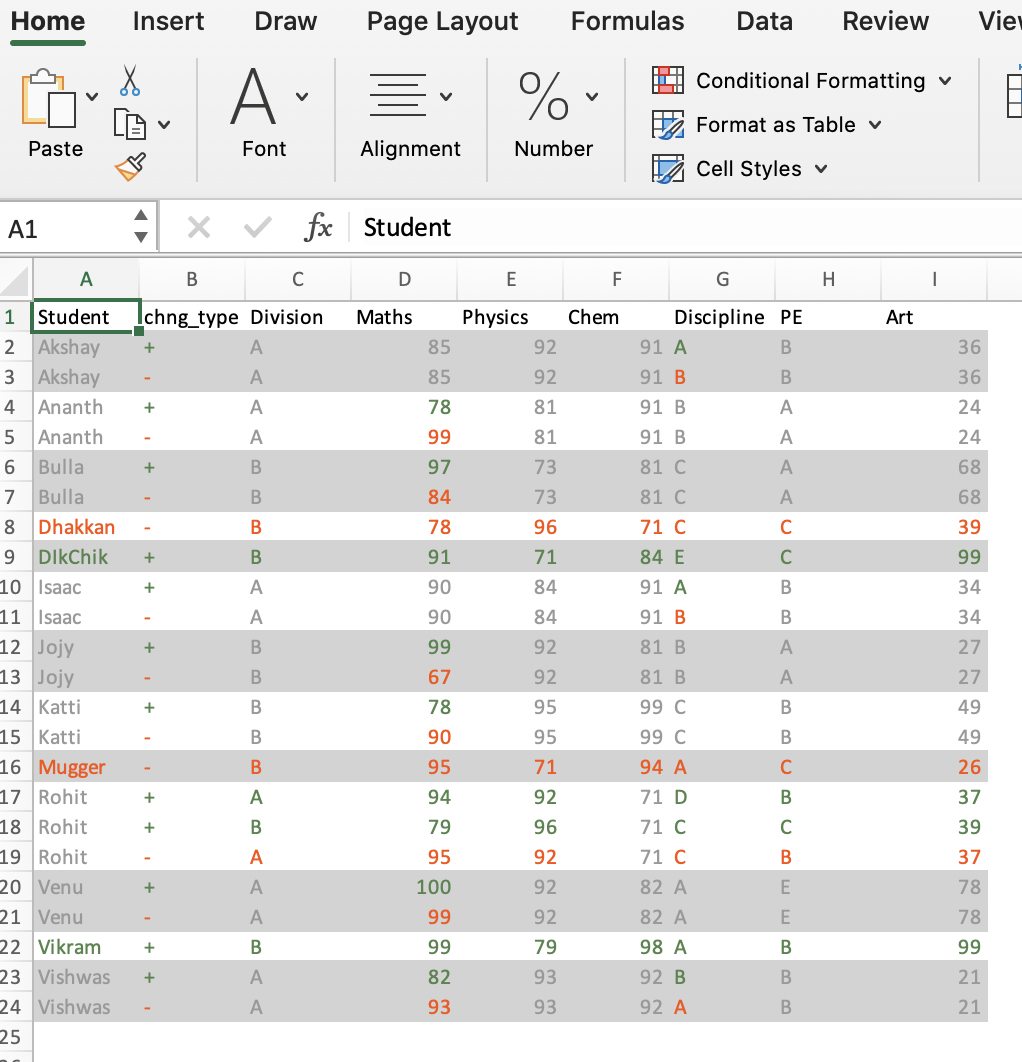 You can get an details of what has changed for each group using the change_count object in the output. A summary of the same is provided in the change_summary object.

We can also group_multiple columns into the grouping variable

Now Rohits in each individual division are considered as belonging to separate groups and compared accordingly. All the other summaries also change appropriately.

You can ignore certain columns using the exclude parameter. The fields that have to be excluded can be given as a character vector. (This is a convenience function to deal with the case where some columns are not included)

The default behavior of the compare_df function is to show only the records that have changed. Sometimes the use might want to preserve all the records even after the comparison and not just see the values that have been changed (especially in the HTML). In this case, you can set the keep_unchanged parameter to TRUE.

For dataframes which have a large amount of differences in them, generating HTML might take a long time and crash your system. So the maximum diff size for the HTML (and for the HTML visualization only) is capped at 100 by default. If you want to see more difference, you can change the limit_html parameter appropriately. NOTE: This is only of the HTML output which is used for visual checking. The main comparison data frame and the summaries ALWAYS include data from all the rows.

You can use the color_scheme parameter to change the color of the cells generated. The parameter must me a named vector or a list with the appropriate names - The default values are c("addition" = "green", "removal" = "red", "unchanged_cell" = "gray", "unchanged_row" = "deepskyblue") but can be changed as needed by the user.

It is possible that you’d like numbers very close to each other to be ignored. For example, if the marks of a student vary by less that 5% across the years, it could be due to random error and not any real performance indictaor. In such a case, you would want to give a tolerance parameter. For this case, giving a tolerance of 0.05 would ignore all the changes that are less than 5% apart from the lower value. 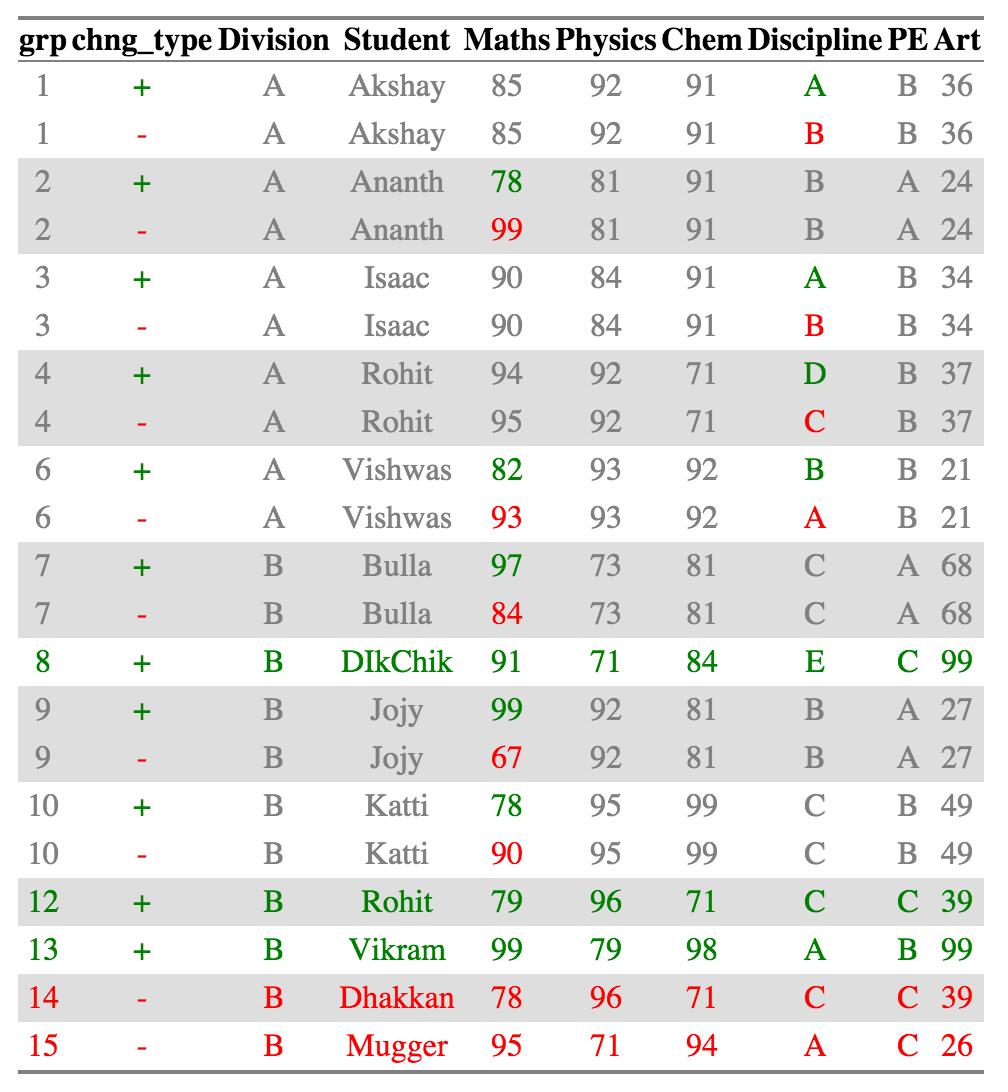 Naturally, tolerance has no meaning for non-numeric values.